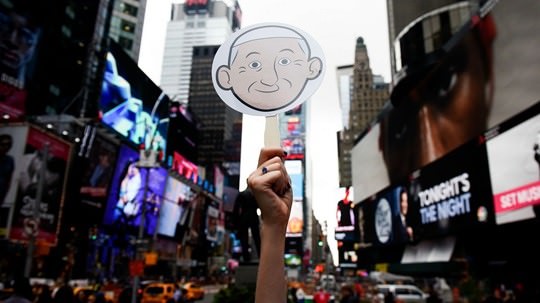 Embracing the incremental work of our witness by Sharon Hodde Miller

Surrounding Pope Francis’s first-ever visit to the United States, Americans are asking: Is this pope doing something new?

On the one hand, faithful Christians know that the pope isn’t a lone outlier in our tradition; all over the world, believers are living among the poor, preaching the gospel, and bringing the love of Christ into dark and forgotten places. Pope Francis is doing so in the spotlight, so for once the world is getting a glimpse of the church at its best, instead of the angry, the shouters, or the judgmental who often make news. Non-Christians can witness an example of the genuine faith many Christians live out in their own lives every day.

The media have swarmed to cover the pope and his appeal. I tuned in as the guests offered their commentary on the Diane Rehm Show earlier this week: “It seems like the Pope hasactually read the Gospels!” Pope Francis “actually follows the example of Christ,” and he “actually believes Jesus’ words that the last will be first.” They marveled at the pope’s embodiment of the life of Christ, as if seeing it for the first time.

As I listened, I was reminded of Jesus’ words in Matthew 5:16: “Let your light shine before others, that they may see your good deeds and glorify your Father in heaven.” For much of my Christian life, I’ve had lofty visions of what this meant: caring for the vulnerable and the poor in a way that is so radical that people clap their hands over their mouths in awe…and then immediately start running after Jesus.

The pope seems to manifest that grand, evangelistic vision. And yet, people aren’t flocking to Jesus. Non-Christians aren’t converting en masse. Despite buzz about a “Francis effect,” the pope has yet to make significant impact on Catholic Church attendance or participation in the United States. In contrast with Jesus’ words in Matthew, the pope’s example has not initiated some worldwide revival.

Trapped by their cynicism, Americans think they know what Christianity is. Christians are judgmental, angry, hypocritical, and narrow-minded. At least that is what many Americans believe, and many Christians agree. As a result, our culture suffers from a collective failure of the imagination. We struggle to conceive of just how good Jesus is because we don’t see it very often.

Our culture, I believe, calls for a specific type of witness to break through the cynicism. The push to win arguments isn’t enough. But love, service, and sacrifice can make an impact. As we follow Jesus’ example closely, and love people just as radically, the Holy Spirit can use us to reignite the imagination of a cynical culture.