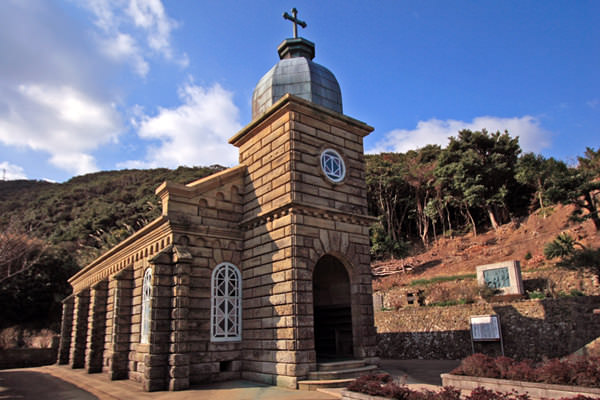 From the Roman Empire to the Cold War-era Soviet Union, many Christian groups throughout history have been forced to conceal their faith to survive government persecution. But some of Japan's kakure kirishitan, or "hidden Christians," have remained closeted for nearly 4 1/2 centuries — long after the threat of persecution had lifted.

Their religion morphed into what is arguably a separate faith, barely recognizable as the creed imported in the mid-1500s by Catholic missionaries, including the Spanish Jesuit Francis Xavier.

On a recent trip to Ikitsuki Island in southern Nagasaki prefecture, one of the few places where the "hidden Christian" traditions hang on, I met a 53-year-old resident named Masahi Funabara. Sitting in the government office where he works, he sang for me in a soft voice the sacred songs taught to his ancestors by the missionaries.

Some of the songs are in Latin, and Funabara struggles a bit to remember them. Shigeo Nakazono, a local museum curator and expert on Christianity, helps him sing.

Nakazono says that while much of the teachings of the missionaries have been lost, the Japanese Christians have preserved the songs in a form quite close to what one might have heard in 16th-century Spain.

This continuity of tradition is an important part of Funabara's belief. "We've kept this religion since the time of our ancestors, and it gives me a sort of mental relief," he says. "I feel it brings strength to my life, and so keeping my faith is very important to me."

Catholicism only had about 40 years to take root in Japan before military ruler Hideyoshi Toyotomi banned Christianity and kicked out the missionaries.

At the Shimano Yakata Museum, which includes a large exhibition on the island's hidden Christian traditions, Nakazono shows me a wooden plaque with an image of Jesus and Mary. He says Japanese authorities used this icon to root out Christians during the height of the persecution of Christians under the rule of the Tokugawa Shogunate.

"People were ordered to trample on it," he says. "Anyone who hesitated or wouldn't do it was arrested and forced to recant his or her faith. If they didn't, they were tortured or killed."

The remaining Catholics went underground. They disguised their images of Jesus and Mary to look like Buddhas. They camouflaged their prayers to sound like Buddhist chants.

Nakazono says that the covert Christians incorporated into their religion the Buddhism, Shintoism and ancestor worship they used as cover for their faith. In essence, a monotheistic religion fused with several polytheistic ones.

Funabara says it's hard for him to separate the different elements of his faith. "If you ask me if I have a single religion," he says, "it's hard for me to answer."

To escape persecution, the covert Christians got rid of all visible signs of Christianity, including churches and crosses. The faithful organized into groups of households, which even today jointly own ritual objects and hold collective religious services in their homes.

A group leader, whose position is passed down from older generations, presides over ceremonies and organizes celebrations such as Christmas Eve.

Believers often put shrines in their homes which hold offerings to their ancestors and Shinto deities. Beside them is a secret wooden panel, which opens to reveal Christian votive images and vials of holy water.

Japan's Meiji government lifted the ban on Christianity in 1873. Some hidden Christians rejoined the Catholic Church. Others chose to remain in hiding — even to this day.

Nakazono says they do this partly out of respect for their ancestral traditions, and partly because secrecy has become a part of their faith.

"They may be concerned that if they reveal their faith too easily, people may make light of it," he says.

A few hidden Christians are willing to speak to scholars, journalists and documentary makers. But their communities are mostly on remote islands that get few visitors; they generally keep to themselves and seldom show their traditions to outsiders.

I was curious about what Catholics think of their hidden brethren, so I visited St. Mary's Cathedral in Nagasaki, an early center of Catholicism in Japan. Also known as the Urakami Cathedral, it was the largest in East Asia until a U.S. atomic bomb destroyed it in 1945. It has since been rebuilt.

I spoke to the Rev. Kawabata, a priest there who suggested that the two groups had become somewhat estranged.

He told me that although he welcomes the "hidden Christians" to his church, "sometimes they insist on their own ways and traditions and don't fit in with us. Sometimes we can't accept them, either."

Meanwhile, young people are moving from the outlying islands to the mainland of Nagasaki prefecture, and it's getting harder to find successors to the hidden Christian traditions on islands like Ikitsuki.

Back there, Funabara told me his is one of only four hidden Christian groups left in his neighborhood, where not long ago there were 20.

Nobody knows exactly how many hidden Christians are left in Japan. Catholics as a whole make up less than 1 percent of Japan's population. But Funabara says he's determined to pass on his religion. "Sure, things are difficult for us now," he says, "but it's nothing compared to the time when our ancestors faced severe persecution."

He says he draws inspiration to do this not from any god, but from the suffering of his Christian forefathers.