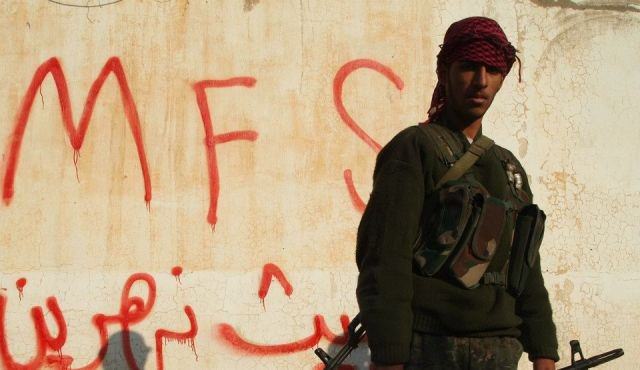 Kurdish forces and local Assyrians battle the Islamic State as the remaining civilians fear for their abducted brethren.

It’s not long after the Islamic State’s February offensive on 11 of the 35 Christian villages nestled along the Khabur River in northern Syria. The villages surrounding Tel Tamer fell like dominoes and over 150 civilians were kidnapped, sending the remaining families into a mass exodus. Some hostages have been forced to convert to Islam, a Christian official says.

“We should resist and stay; we shouldn’t leave our land,” says Ishak over the roar of a mortar attack a few hundred meters down the road.

The young mother sits in her minute home with her 9-year-old son Ashur Francis, a picture of the Last Supper hanging crookedly on the wall behind them. Ishak divorced her husband nine years ago and her family fled the Syrian turmoil and moved to Canada and the United States.

Sporadic waves of immigration following threats by the Free Syrian Army in 2012 and the rise of the Islamic State, also known as ISIS or ISIL, have seen over 500 Christian Assyrian families flee this once popular summer destination for Syrians.

By the end of last year more than half the Assyrian community had left — today there is only a handful of people. Most have fled to the cities of Hasakeh, Amuda and Qamishli.

“The people who have stayed to protect the town are my new family; it’s because of them that we are still here,” says Ishak as she prepares coffee for the armed men outside her home. Most of them are part of the Assyrian Guards, an armed security organization. The rest are civilians who have taken up arms.

“We are surrounded from the south and west,” explains Jiwan Issa, the head of Tel Tamer’s council. He signals toward the town of Tel Nasri, some 700 meters to the south and still under Islamic State control. On Easter morning the Sunni extremists blew up the village’s 80-year-old St. Mary Church.

“What we need is for you to finish them; we want them off our land,” screeches an elderly woman from her front door. Tensions between Arabs and Christians are high in northern Syria as the Islamic State’s violence deepens the fears and rifts.

“Kurds and Assyrians live peacefully together but some Arabs have joined ISIS,” says Issa, lowering himself behind a mound of earth to avoid the gaze of an enemy sni