It's a popular story, but all the documentary and historical evidence tells us that no Jews were in Egypt at the time of the pyramids. 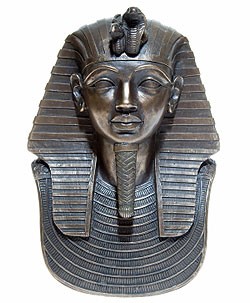 The stories we hear in Sunday school seem to form the basis for the popular belief that Jewish slaves were forced to build the pyramids in Egypt, but they were saved when they left Egypt in a mass Exodus. That's the story I was raised to believe, and it's what's been repeated innumerable times by Hollywood. In 1956, Charlton Heston as Moses went head to head with Yul Brynner as Pharaoh Ramesses II inThe Ten Commandments, having been placed into the Nile in a basket as a baby to escape death by Ramesses' edict that all newborn Hebrew sons be killed. More than 40 years later, DreamWorks told the same story in the animated Prince of Egypt, and the babies died again.

In 1977, Israeli prime minister Menachem Begin visited Egypt's National Museum in Cairo and stated "We built the pyramids." Perhaps to the surprise of a lot of people, this sparked outrage throughout the Egyptian people, proud that they had built the pyramids. The belief that Jews built the pyramids may be prominent throughout Christian and Jewish populations, but it's certainly not the way anyone in Egypt remembers things.

Pop culture has a way of blurring pseudohistory and real history, and many people end up never hearing the real history at all; and are left with only the pseudohistory and no reason to doubt it. This is not only unfortunate, it's dangerous. In the words of Primo Levi inscribed front and center inside Berlin's Holocaust Museum, "It happened, therefore it can happen again." 20th century Jewish history is probably the most important, and hardest learned, lesson that humanity has ever had the misfortune to be dealt. Forgetting or distorting history is always wrong, and is never in anyone's best interest.

I've heard some Christians say the Bible is a literal historical document, thus Jewish slaves built the pyramids (the Bible actually doesn't mention pyramids at all, this came from Herodotus. See below. - BD); and I've heard some non-religious historians say there's no evidence that there were ever Jews in ancient Egypt. Both can't be true. To find the truth, we need to take a critical look at the archaeological and historical evidence for the history of Jews in Egypt. In order to do this responsibly, we first have to put aside any ideological motivations that would taint our efforts. We're not going to say such research is sacrilegious because it seeks to disprove the Bible or the Torah; we're not going to say such research is a moral imperative because religious accounts are deceptive; and we're not going to pretend that such research is racially motivated against either Jews or Egyptians. We simply want to know what really happened, because true history is vital.

One of the first things you find out is that it's important to get our definitions right. Terms like Jew and Hebrew are thrown around a lot in these histories, and they're not the same thing. A Jew is someone who practices the Jewish religion. A Hebrew is someone who speaks the Hebrew language. An Israelite is a citizen of Israel. A Semite is a member of an ethnic group characterized by any of the Semitic languages including Arabic, Hebrew, Assyrian, and many smaller groups throughout Africa and the Middle East. You can be some or all of these things. An Israelite need not be a Jew, and a Jew need not be a Hebrew. Confusion over the use of these terms complicates research. Hebrews could be well integrated into a non-Jewish society, but modern reporting might refer to them as Jews, which can be significantly misleading.

Now, there are more than just a single question we're trying to answer here. Were the Jews slaves in ancient Egypt? Were the pyramids built by these slaves? Did the Exodus happen as is commonly believed?

The biggest and most obvious evidence — the pyramids themselves — are an easy starting point. Their age is well established. The bulk of the Giza Necropolis, consisting of such famous landmarks as the Great Pyramid of Cheops and the Sphinx, are among Egypt's oldest large pyramids and were completed around 2540 BCE. Most of Egypt's large pyramids were built over a 900 year period from about 2650 BCE to about 1750 BCE.

We also know quite a lot about the labor force that built the pyramids. The best estimates are that 10,000 men spent 30 years building the Great Pyramid. They lived in good housing at the foot of the pyramid, and when they died, they received honored burials in stone tombs near the pyramid in thanks for their contribution. This information is relatively new, as the first of these worker tombs was only discovered in 1990. They ate well and received the best medical care. And, also unlike slaves, they were well paid. The pyramid builders were recruited from poor communities and worked shifts of three months (including farmers who worked during the months when the Nile flooded their farms), distributing the pharaoh's wealth out to where it was needed most. Each day, 21 cattle and 23 sheep were slaughtered to feed the workers, enough for each man to eat meat at least weekly. Virtually every fact about the workers that archaeology has shown us rules out the use of slave labor on the pyramids.

It wasn't until almost 2,000 years after the Great Pyramid received its capstone that the earliest known record shows evidence of Jews in Egypt, and they were neither Hebrews nor Israelites. They were a garrison of soldiers from the Persian Empire, stationed on Elephantine, an island in the Nile, beginning in about 650 BCE. They fought alongside the Pharaoh's soldiers in the Nubian campaign, and later became the principal trade portal between Egypt and Nubia. Their history is known from the Elephantine Papyri discovered in 1903, which are in Aramaic, not Hebrew; and their religious beliefs appear to have been a mixture of Judaism and pagan polytheism. Archival records recovered include proof that they observed Shabbat and Passover, and also records of interfaith marriages. In perhaps the strangest reversal from pop pseudohistory, the papyri include evidence that at least some of the Jewish settlers at Elephantine owned Egyptian slaves.

Other documentation also identifies the Elephantine garrison as the earliest immigration of Jews into Egypt. The Letter of Aristeas, written in Greece in the second century BCE, records that Jews had been sent into Egypt to assist Pharaoh Psammetichus I in his campaign against the Nubians. Psammetichus I ruled Egypt from 664 to 610 BCE, which perfectly matches the archaeological dating of the Elephantine garrison in 650.

If Jews were not in Egypt at the time of the pyramids, what about Israelites or Hebrews? Israel itself did not exist until approximately 1100 BCE when various Semitic tribes joined in Canaan to form a single independent kingdom, at least 600 years after the completion of the last of Egypt's large pyramids. Thus it is not possible for any Israelites to have been in Egypt at the time, either slave or free; as there was not yet any such thing as an Israelite. It was about this same time in history that the earliest evidence of the Hebrew language appeared: The Gezer Calendar, inscribed in limestone, and discovered in 1908. And so the history of Israel is very closely tied to that of Hebrews, and for the past 3,000 years, they've been essentially one culture.

But if neither Jews nor Israelites nor Hebrews were in Egypt until so many centuries after the pyramids were built, how could such a gross historical error become so deeply ingrained in popular knowledge? The story of Jewish slaves building the pyramids originated with Herodotus of Greece in about 450 BCE. He's often called the "Father of History" as he was among the first historians to take the business seriously and thoroughly document his work. Herodotus reported in his Book II of The Histories that the pyramids were built in 30 years by 100,000 Jewish slaves [In point of fact, Herodotus only says 100,000 workers. He does not mention either Jews or slaves. So even this popular belief seems to be in error, and the origin of the idea of Jews building the pyramids remains a mystery - BD]. Unfortunately, in his time, the line between historical fact and historical fiction was a blurry one. The value of the study of history was not so much to preserve history, as it was to furnish material for great tales; and a result, Herodotus was also called the "Father of Lies" and other Greek historians of the period also grouped under the term "liars". Many of Herodotus' writings are considered to be fanciful by modern scholars. Coincidentally, the text of the Book of Exodus was finalized at just about exactly the same time as Herodotus wrote The Histories. Obviously, the same information about what had been going on in Egypt 2,000 years before was available to both authors.

Which brings us to the final question: Was there a mass Exodus of Jewish slaves out of Egypt? There is no record of any such thing ever happening, and the simple reason is that there is no time in which it could have happened. No Egyptian record contains a single reference to anything in Exodus; and by the time there were enough Jews living in Egypt to constitute an Exodus, the time of the pyramids was long over. And Pharaoh Ramesses can be let off the hook as well: With apologies to Yul Brynner, no documentary or archaeological evidence links any of the Pharaohs bearing this name with plagues or Jewish slaves or edicts to kill babies. Indeed, the earliest, Ramesses I, wasn't even born until more than a thousand years after the Great Pyramid was completed. His grandson, the great Ramesses II, lived even later.

Some historians have attempted to rationalize the Exodus by drawing parallels to certain cities and trade centers that grew and shrank over the centuries for various reasons. Perhaps one of these economic shifts inspired the story of Exodus. Well, perhaps it did, but the nature of such a migration is, quite obviously, fundamentally different than that depicted in Exodus.

The pseudohistory of ancient Egypt is disrespectful to both Jews and Egyptians. It depicts the Jews as helpless slaves whose only contribution was sweat and broken backs, when in fact the earliest Jewish immigrants were respected allies to the Pharaoh and provided Egypt with a valuable service of both trade and defense. The pseudohistory also takes away from the Egyptians their due credit for construction of humanity's greatest architectural achievement, and portrays them as evil, bloodthirsty slavemasters. Pretty much every culture in the world at that period in history included slavery and conflict, and the Egyptians probably weren't any better or worse than most peoples.

Understanding history is essential to understanding ourselves. Although a story like Exodus is profoundly important to so many people throughout the world, the history it describes is false; and the faithful are best advised to seek value in it other than as a mere list of events. Doing so opens the door to a better comprehension of who we are as humans, and it's that shared history that will always unite us — no matter our race, color, or culture. It's just one little more service provided by good science.